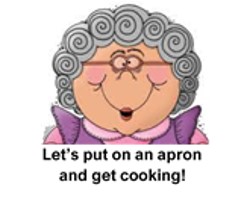 Bubbie’s Latkes Are the Talk of the Town!

Kids today!  What do they know? They think those skinny strips, looking like pencils, dropped in some hot oil and smothered in ketchup, and sold at those funny stores with the big yellow “M’s” in front, are real potatoes. HA!  If you want to eat real potatoes, you need to try my potato latkes!

When I was a little girl, latkes were a treat that we ate only during the holiday of Chanukah, the festival of lights. Now we make them to eat all year round, Just like my knishes, I like to use Russet potatoes because they are high in starch and hold together better when cooked.  I wash them but leave the skins on.  That is one of the secrets that you should not share with anyone else.  It is between you and me. The idea is to finely grate each potato.  In the old country, all we had was a hand grater- you know it’s the silver looking box you have seen in your Bubbie’s kitchen.  Next, you grate carrots and onions and add to the mix. That is another secret you cannot share.  Carrots add just a bissel (little bit) of sweetness to the mix.  My Zayde (grandfather) taught me that trick and I have used it ever since.

Once everything is mixed, there will be a lot of water in the bowl, and you need to get it out or you will have a real tough time frying.  In the old country, we would put the mixture in a cheese cloth bag and tie it to the dog and then release the cat. HA!  After the chase was over, the water was gone, but so was the cat. We found a better way was to spin the bag over our heads and that saved time and a few cats.  Of course, it did require umbrellas, galoshes, and washing down the walls.  Oy vey, (goodness gracious) what a mess!   Here in the assisted living home they frown on the mess from the overhead spinning so now I use  one of those salad spinner thingies – no umbrellas, galoshes or mess.   (That device was probably invented by some cat loving cleaning lady – HA!)  Next, I add eggs, flour and a pinch of salt and pepper to complete the mix.  Now for the fun part, the frying in oil.  When they are golden brown on both sides, they are ready for tasting.  Eat them with sour cream or apple sauce and you will be in heaven.  If those fellows down at the big yellow “M” store ever tasted these, they would be throwing out those fried pencils and add Bubbies graters to their kitchens.

Until then, Zei Gazunt (be well).

Did you order potato knishes or beef knishes?

Are you ready for some latkes?