Join us for a pre-Hanukkah celebration on Saturday, December 17th.

“Hanukkah, one of the most widely observed Jewish holidays, is a festive eight-day celebration that for many people falls during the darkest, coldest season of the year. Also called the Festival of Lights, the holiday brings light, joy, and warmth to our homes and communities as we celebrate with candles, food, family, and friends. Light comes literally, with the lighting of an additional candle each day, and metaphorically, through a newer emphasis on charitable donations and a commitment to tikkun olam during the holiday. Hanukkah (alternately spelled Chanukah), meaning “dedication” in Hebrew, commemorates the victory of a small group of Jewish rebels (led by Judah Maccabee and his brothers, collectively known as “the Maccabees”) over the armies of Syria in 165 B.C.E. and the subsequent liberation and “rededication” of the Temple in Jerusalem. Modern celebrations of Hanukkah focus on family and friends and include the lighting of the Hanukkah menorah (also called a hanukkiyah); singing and playing special songs and games (dreidel); and eating foods prepared in oil including latkes, sufganiyot, bimuelos (fried dough puffs) and keftes de prasas (leek patties).”

For more information about Hanukkah, visit the URJ website 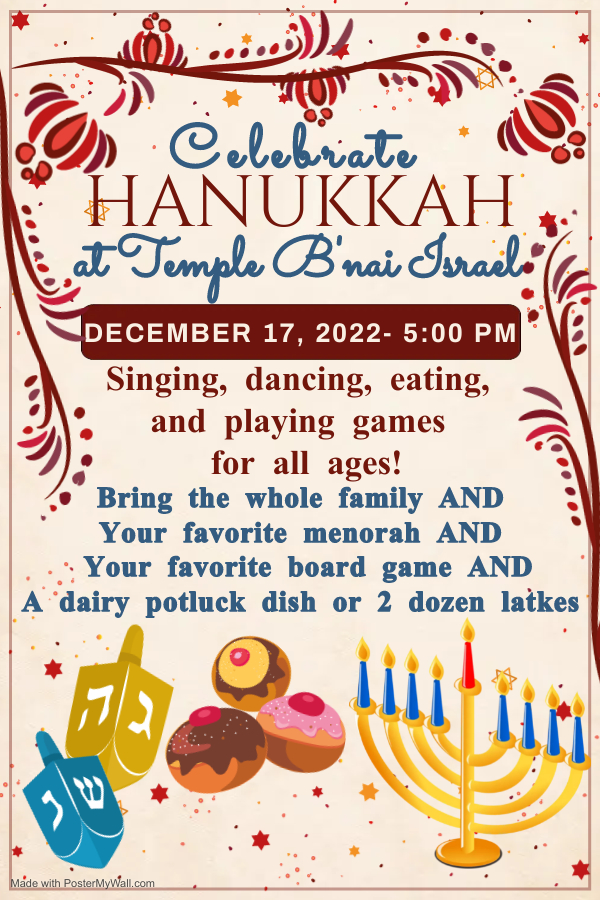 Havdalah and our pre-Hanukkah menorah lighting will begin at 5 p.m

Candles for the Hanukkah Party will be provided by TBI.  You can purchase additional candles and other Hanukkah items at our gift shop during the program along with everything else you need to create a festive and “Freilich” (joyous) Hanukkah in your home.

Please RSVP for our pre-Hanukkah celebration.