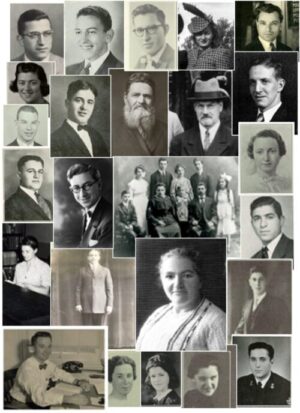 The dirt is flying as efforts to uncover the roots of the history of the Jewish community in Laconia got underway at a virtual history night that was held on January 8, 2022, as part of TBI’s ongoing Adult Education program. With Jewish residents dating back to about 1905, the community has thrived for more than a century, growing into an extensive and intertwined network of Jewish life and connectivity.

The first Jewish family to arrive in Laconia was that of David Snierson, who is shown on records as residing in Laconia as early as 1905.  Others followed in those early years, including the Sakansky, Rosen, Achber, Bean, Melnick, Alterman and Gozonsky families.  Many of these Eastern European immigrants started off as junk dealers and grew to become some of Laconia’s leading businessmen, merchants, and professionals.  In 1920 the first rabbi was hired by what became known as Sons of Israel, the Orthodox Synagogue.  The rabbi led Shabbat Services in homes and High Holiday Services were held at the Knights of Columbus Hall and other large gathering places.  In 1937 the synagogue was built on Court Street and has remained the home of Temple B’nai Israel to this day.   The original building consisted of a sanctuary, small kitchen and bathroom, and a classroom on the second floor.  A home for the rabbi (who also acted as a shochet – kosher meat slaughterer) was built next door.  The first Torah was donated by founding member Isaac Sakansky.  After the second world war new families moved to Laconia from Boston and New York – families who were not fluent in Hebrew prayer –and the congregation transitioned from Orthodox to Conservative and by the 1960s to Reform services.  The name was changed to Temple B’nai Israel to indicate that it was inclusive of women.

The recent Adult Ed program brought current TBI members together with many descendants of the founders, on Zoom, to share stories and learn about the founding of Temple B’nai Israel and the history of the Jewish community of Laconia.  Rabbi Danson hosted the panel that shared information about their families’ relocation to Laconia and their ancestors’ experiences in the community over the years.  Participants shared anecdotes and memories that sparked discussions which resulted in much laughter and many fond recollections of those who came before.  The close-knit and interconnected relationship that existed amongst the synagogue families emerged as an ongoing theme during the evening.  “It was very moving to hear so many stories that were heard directly from grandparents and even great grandparents. They were stories of imaginative responses to moving to a new land, and of family and community lending a hand to the people who came next,” observed Rabbi Danson.

One of the important historical documents that is the foundation of the history project is a thesis that was written by Stephanie Melnick Ackerman in 1985 entitled “It’s Nice But It’s Not New York – Early Jewish Community Life in Laconia, New Hampshire.”  Stephanie’s grandfather, Sam Melnick, was a beloved member of the Jewish community of Laconia.  Stephanie’s warm memories of her grandfather and the community led her to interview the living descendants and chronicle their stories in a master’s thesis that can be read here – https://tbinh.org/its-nice-but-its-not-new-york/

Current member Lynn Brody Keltz, a descendant of Dr. Nathan Brody who was a well-respected leader in Laconia and the temple, has created an extensive genealogy of the founding families of the congregation.  Through her research Lynn has created a “Family Tree of Temple B’nai Israel.”  It includes Temple B’nai Israel’s earliest Jewish families and their descendants, as well as documents and images related to their lives.  The tree currently contains approximately 850 individuals and continues to grow.  Read Lynn’s genealogy here- https://tbinh.org/the-family-tree-of-temple-bnai-israel/

The end result of “Digging Our Roots” will be displayed at the Belknap Mill in Laconia this coming September as part of the ongoing “Laconia’s Legacy Series.”  Stories, photographs, and artifacts from the Jewish community are being curated for a month-long historical display at The Mill.  Laconia’s Jewish Heritage Exhibit is the second in this series that began in 2021 with Laconia’s Franco-American Heritage Exhibit.  For more information or to participate, contact Tara Shore, Program & Operations Manager, operations@belknapmill.org, 603-524-8813.

From a seed grew a network of interconnected roots which together form today’s congregation community.  Here’s to the next century of Lakes Region Jewish history yet to made.